Smash the sorcerers!
An abstract strategy board game.

Throw yourself into a mindboggling tactical battle.
Which Sorcerer is the last to stand, and leave the arena as a grandmaster?

Bodogemu has a written permission as a non-exclusive license to use this game from the designer Tommy De Coninck. Thank you very much!

This is a local copy of the official rules.

Splut! is a boardgame, so a Splut! gameboard is required. Each player also needs 3 pieces to play with, a Sorcerer, a Troll and a Dwarf.

There are always 4 Rocks located at the board, regardless of the amount of players.

Start of the Game

" Players, take Positions! " Behold the picture below. All four Rocks are used in every game. Place them at the outmost squares of the board. (The 4 squares with only one adjacent square.) 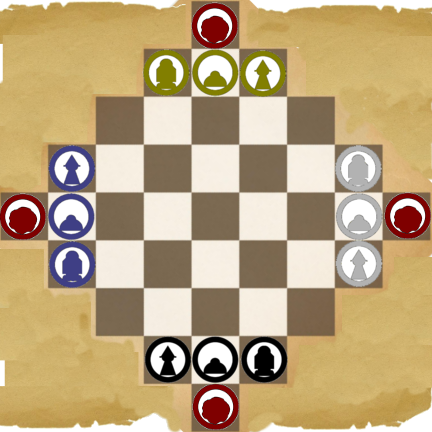 Splut! is designed for 2 to 4 players. When a player's turn is over, the player to the left takes her/his turn. (In other wordings; turns revolve clockwise.)

The object of the game is to kill all opposing Sorcerers by throwing a Rock on their brittle heads. Once a Sorcerer dies, his entire team is removed from the Arena (gameboard). You win a game of Splut! when your Sorcerer is the last one standing in the 'arena'.

Players alternate turns. Regardless of how many players compete, please administer following movement rules. (* All moves are mandatory.)

During each turn you MUST perform your moves (steps) with any of your three pieces. Each piece has its own unique way of acting. (Spread your obligatory amount of moves among your pieces as desired.)

e.g. One step with the Troll, then one step by the Dwarf, followed by another step by the Troll. Totalling three steps (or “moves”).

Overview of the Playing Pieces

Pull Back: Because of his bulky size a Troll can put his hands on a Rock and pull it towards him. When moving, he can Pull Back (or “drag”) a Rock from an adjacent square onto the square he just left. Only Pull Back Rocks in a straight line aligned with your Troll! (Pulling is optional.)

Throw: When your Troll ends his move on a square containing a Rock, he picks it up and must Throw it away in any horizontal or vertical direction. The flying Rock only stops when it hits an Obstacle or a Target. Throwing immediately ends your turn. (Note: You cannot Levitate Rocks onto a square occupied by a Troll in order to then automatically Throw it away.)

The Thrown Rock flies over empty squares (and over Dwarves) until it hits an Obstacle or Target;

Thrown Rocks can fly over the square occupied by a Dwarf. The Rock will however land directly on top of that Dwarf if the following square is an Obstacle. That unfortunate Dwarf is then removed from the game.

When you hit a Sorcerer with a flying Rock, remove the Sorcerer and his entire team from the board, and put the thrown Rock at the square where the Sorcerer died.

Push : The small muscular body of the Dwarf is to his advantage. As a special action, the Dwarf can Push all pieces in his path when moving. All pieces in a straight line are moved in the same direction as the Dwarf until they hit a sideline of the gameboard.

Small : Thrown Rocks will pass over the Dwarf because of his small size. You cannot Levitate Rocks onto or through squares occupied by a Dwarf. Levitated Rocks are still blocked because they are floating too low above the ground. (Also see rules for Throwing.)

Levitate : A Sorcerer may Levitate Rocks. Levitating is optional. When Levitating a Rock, move the Rock simultaneous with your moving Sorcerer. (The Levitated Rock follows the same movement path as the Sorcerer.) You can use this action for only one Rock each turn.

Obstacles, Targets AND Dwarves do block Levitated Rocks. You cannot kill an enemy Sorcerer by Levitating a Rock onto him.

When you hear “SPLUT!“ caused by a Rock that just landed upon a Sorcerer, then the game is over for the player controlling that unfortunate Sorcerer. There are always four Rocks provided in the arena regardless of the amount of players. Rocks are not part of any player's team.

When a Troll is adjacent to a Rock, he can put his arms on top of the Rock and Pull it to him. (Optional.) 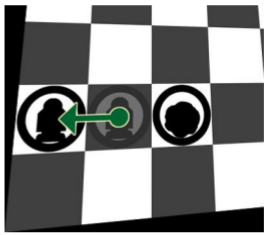 The Stonetroll moves away from the Rock ... 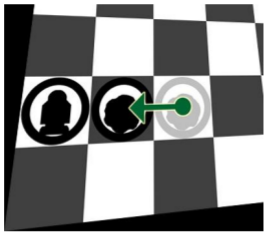 ... and Pulls it to him.(This action equals one move.)

When a Troll lands on a square with a Rock, he immediately Throws it away with great force. 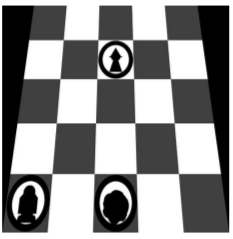 The Rock is in a straight line with a Sorcerer! 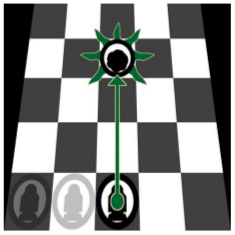 SPLUT! The Rock crashes on top of the Sorcerer.

By focusing all energy on a Rock, the Sorcerer can move it by sheer will alone. 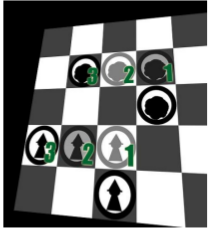 The Sorcerer moves (one, two or three squares) and the Rock mimics the same move(s).

All pieces that are in his way will be moved in the same direction as the Dwarf. 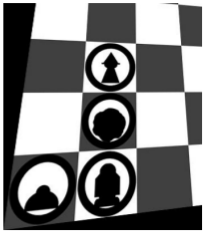 The Dwarf first Pushes the Troll aside ... 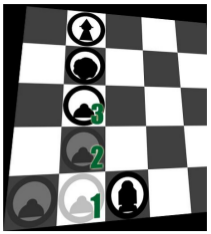 ... and then all other pieces.

Adjacent
Squares next to each other but not diagonally.
Dwarf
Can Push. With an Obstacle in the back, any Thrown Rock can crush the Dwarf.
Levitate
Moving a Rock close near the ground, simultaneously with your Sorcerer. Obstacles, Targets and Dwarves block Levitation. The Levitated Rock has no momentum to do any damage.
Move
All moves (or steps) are either horizontal or vertical. Diagonal moves are prohibited.
Obstacle
A Thrown Rock land on the square in front of an Obstacle. Trolls, a sideline of the gameboard and other Rocks are Obstacles.
Push
Move all pieces in a straight line. Stop when the pieces reach a sideline of the gameboard.
Rock
Used to be Levitated or Thrown. Four Rocks are always present.
Sorcerer
Can Levitate Rocks. You lose the game if a Rock happens to land on your Sorcerer.
SPLUT!
The sound of a thrown Rock crushing a Sorcerer (or occasionally a Dwarf).
Target
A Thrown Rock lands on the square of a Target, effectively removing that Target from play. Sorcerers are Targets.
Throw
A Troll landing on a square with a Rock, immediately rockets it away. A Throw always immediately ends your turn.
Toco
Nickname of game designer and solid slug slinging sorcerer Tommy De Coninck.
Troll
Can Pull or Throw. Is an Obstacle for Rocks. Is ugly and strong.

You cannot use any of the ideas or contents of this publication for commercial purposes without written authorization of the designer Tommy De Coninck.

Splut! © is invented and designed by Tommy De Coninck - www.tocoking.be/splut - info@tocoking.be
Rulebook Version 4
Special thanks to "Whaat?" Buzzeman, "Oi, toss me tha rock!" Riot and "Disney" Djali for playtesting!
Thanks Artyomch, Midaga and many others for reviewing the rules.