The Man In The Moon

Don´t be the man in the moon. Don't be the first to stay with only one piece!

(Original rules from the 1890 edition)

Implements: Two sets of twelve men each, differently colored, one set for each player.

The Object of the game is to see who can avoid becoming the "Man in the Moon."

The Board represents a field of twenty-five squares, containting pictures of moons, the game being played on all the squares. 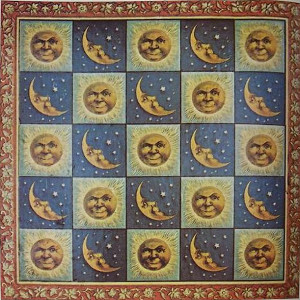 To Win: The player who succeeds in reducing his opponent to one man, wins the game. The single man left is the "Man in the Moon"

When a player flanks one or more opposing counters between two of his own, they are all captured as long as there are no intervening empty spaces.
If the players make 20 moves with any capture the game ends. The winner is the player with more counters on the board. If there's the same number of counters for each player there's a draw.